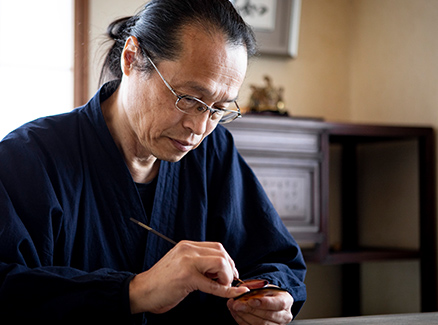 Mitsuhiko Takada was born in Ogaki City, Gifu Prefecture, Japan. He became Kaga Maki-e artist because he had many opportunities to appreciate art when he was very young due thanks to his father who was an art dealer. It was then that he was extremely attracted to “Gold” and the fine elegant techniques of Kaga Maki-e.

He studied under Kaga Maki-e master Ikko Kiyose [清瀬一光] in Kanazawa City, Ishikawa Prefecture. Later, he became independent and qualified as Japanese Traditional Artist (Department of Maki-e in Kanazawa Lacquerware). He currently also lectures on techniques at the Department of Art, Kinjo College in Hakusan City, Ishikawa Prefecture. Recently, he mainly creates tea jars, accessories and other household items while also repairs and restores them using the “Kintsugi [金継ぎ]” technique, repairing broken pottery with lacquer dusted or mixed with powdered gold, silver or platinum, for example. By repairing and restoring old or broken items, he honed his techniques and became able to decorate on any kind of material.

Though arrestingly beautiful, lifestyle changes have led to the loss Japanese traditional culture and manners and household items decorated with Maki-e are growing scarce. Therefore, the creation of “new” pieces became a necessity.

Takada has developed a Maki-e technique that can decorate any kind of material: Les Paul guitars, professional microphones, custom-fit in-ear monitors (originally developed for musicians to monitor their sound on stage), instrumental panel for antique sportscars (the Toyota 2000GT solar car) and anything that represents “custom pieces that are only-one-in-the-world and the collaboration of old and new”. He also collaborated with potters to decorate ceramic plates with Maki-e and exhibited them at Paris, France.

“Kaga Maki-e requires at least 8 steps and as much as over 200 precise steps to create a beautiful piece,” he says.

He strongly feels that as many people as possible should know the wonderfulness of Kaga Maki-e that has been passed down by our ancestors. At the same time, he strongly believes that those Maki-e techniques must be passed down to the next generation of artists.

“I wish to push the envelope of the traditional Kaga Maki-e world through the collaboration of old and new, other industrial arts and different cultures. I want to create custom pieces using only Japanese decoration methods, such as Maki-e, for collectors who want pieces that are only-one-in-the-world and I believe they will deliver much happiness to all my customers,” he says.

He is also tiring to support unfortunate children in foreign countries (for example in Mongolia) by helping to improve their skills for daily lives through technical instruction of Kaga Maki-e. “Whatever the traditional technique, I hope to continue to create ‘Something New’ pieces that are relevant and pass it on to the next generation.”